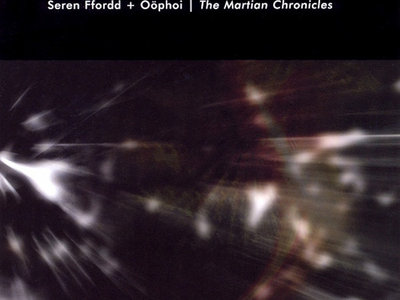 It comes in a lovely digipack.

Seren Ffordd, in Wales based drone master, has released since 2006 several albums and EPs on Oöphoi's Umbra and Penumbra labels. Now teamed with the Italian drone king for their first collaborative work, "The Martian Chronicles", on Hypnos, where both artists have released several albums (Seren Ffordd on Hypnos Secret Sounds). Sculpted during 2006-2009 and inspired by Ray Bradbury's short science fiction story from 1950, "The Martian Chronicles", released in October 2011 and packaged in attractive 4-panel digipak, is an adventurous and deep sonic exploration merging the talents of Andy Benford aka Seren Ffordd and Gianluigi Gasparetti aka Oöphoi. Nearly 15 minutes long overture, "The Long Years", opens this grandeur voyage with colossally deep drones with invading bells, gongs and extraterrestrial-infused rumblings and resonations. A truly immense soundwalls designed for all aficionados of ultra deep, massive ambience, magnificent!!! With the next, again 15-minute composition, we dive straightly into a chasmic void. "Dead Cities" are painted in the first half with extremely freezing drones and mechanized breathings climbing into the throne of drones, while in the second half the breathings slowly dissolve and some, rather distractive and ominous effects step into the fore and color this ultimate giant drone wizardry. This is stunningly stellar and powerful sound sculpting evoking wonderful sense of spatial emptiness!!! "Blue Fire", another longer piece, keeps on the more active, emerging route, where assorted, mostly otherworldly, at times oddly sounding effects and outbursts enrich the drone. Also few recognizable sounds can be heard, for example something like a trot of a horse. "End Of A Changeling" is shorter, eclectic piece featuring extracts from each track, cut and mixed. "Canals" opens with watery and distant storm sounds that support more free floating drifts, quite relieving and relaxing when comparing to preceding adventurous sonic alchemy. The next composition, "Flamebirds Waiting For The Storm", as its title tells, is flavored with processed bird calls, later the rain and thunder shake the heaven to achieve the most organic environment. Deeply echoed, slow-motion drones with occasional rumblings escape into the darkness of sinkholing "Unremembered" and provide the closing part of this truly absorbing and fantabulous sonic mystery and mastery. "The Martian Chronicles" is purely transcendental listening experience!!! Two drone purveyors are unlocking the gateway of the Void, enter now!!!

ships out within 3 days
Purchasable with gift card