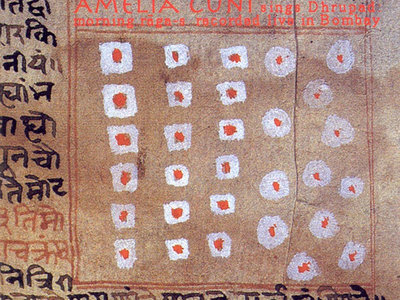 On this recording, Amelia Cuni presents two ragas, both of which, according to the time-theory of Indian music, are prescribed for early morning performance, and are associated with a devotional mood. They form a part of Amelia's single most brilliant concert appearance in India, which catapulted her into celebrity status.

The performance was recorded live at the Dadar Matunga Cultural Centre in Bombay (January26,1995). This institution invites performances with utmost discernment, makes the most stringent demands on their musicianship, evaluates concerts astutely,and rewards the worthy with recognition like none other.

Ms.Cuni is recognised today as the finest non-Indian exponent of vocal music in the mideaval Dhrupad style, and probably the only significant Dhrupad vocalist amongst women anywhere. Ms. Cuni's achievement is exceptional because of her command over all the departments of the art form -- the grammar of the Raga melodic structures, the rhythmic disciplines, sensitivity to the literary content of the poetic form,and the distinctive technique of voice production with its demands on breath-control, lung-power, and tonal precision. This recording also establishes Ms. Cuni as a highly original musician. She has integrated her training with maestros from three different stylistic traditions of Dhrupad music into a refreshing and distinctive esthetic experience. Its originality lies in its spacious melodic vision, the absence of obvious masculinity which characterises traditional Dhrupad, and its subtle, though astute, handling of rhythmic intricacies. Ms. Cuni's music is intellectually subtle, grammatically sound, and structurally orthodox. But, a great deal of her music's appeal rests on the resplendent luminosity of her voice, and the emotional intensity with which she charges her renditions. For, in the ultimate analysis, all art must liberate grammar in order to become emotionally irresistible.

Recorded Live at the Dadar Matunga Cultural Centre in Bombay
on the 26th of January, 1995 by Rajiv Deshpande.
Mixed by Amelia Cuni and Stefano Musso on Pro-tools, December 1998.
The CD was reprint on the Navras Record, London in November 2000.

The term Dhrupad (Dhruva = immutable/ fixed + Pada = Hymn/ verse) refers to a style of presenting Raga based music which dominated Hindustani (North Indian)classical music between the 15th and the 18th centuries. Dhrupad has its origins in an unbroken musical tradition going back to the pre-Christian era. The tradition has, over the millenia, shaped two distinct streams: the originaldevotional form, "Haveli Sangeet" (the Dhrupad of the temples) and its later manifestation, Darbari Dhrupad (The Dhrupad of RoyalCourts) which is the performing art. In its present form, Darbari Dhrupad, the performing art, is an offshoot of "Prababdha Gana" (Prabandha = organisation/structure, "Gana" = song/singing), which enjoyed great popularity between the 11th and 13th centuries. The Golden Age of Dhrupad commenced when the Mughal Emperor Akbar (Reign:1542-1605),invited the legendary musician, Mian Tansen, to to be one of the "Navratnas"(Nav= Nine, Ratna=gem) at the Imperial Court.

ships out within 3 days
Purchasable with gift card